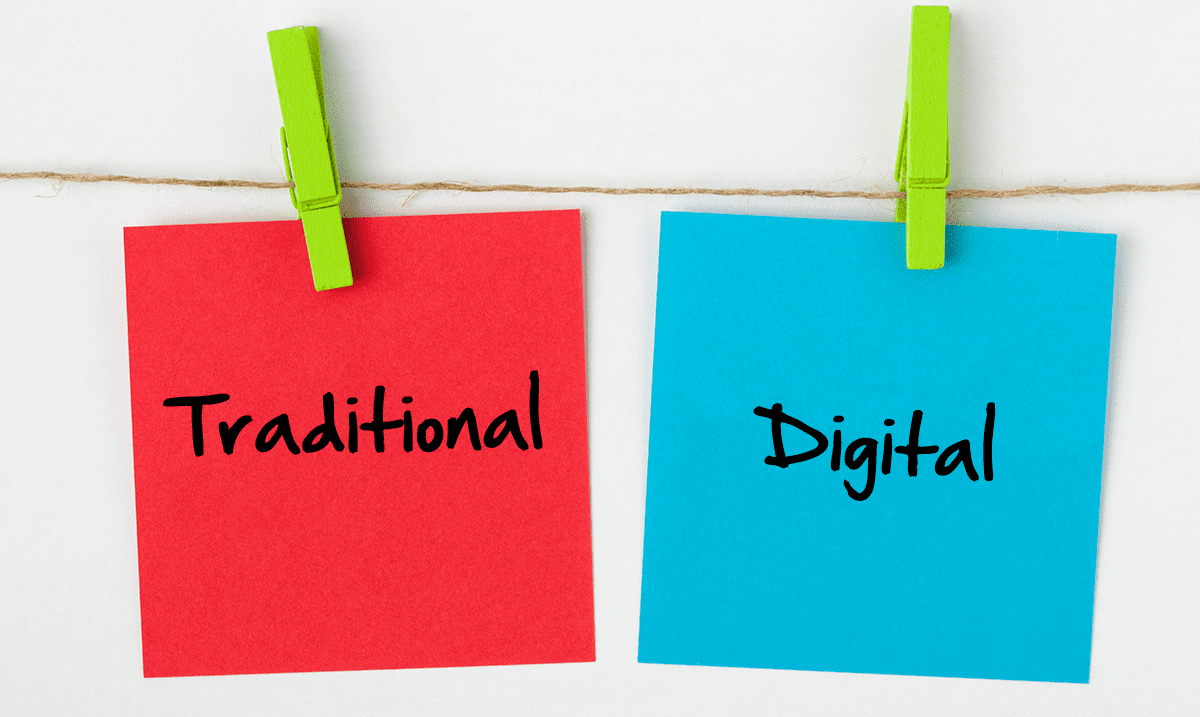 Digital advertising and traditional advertising differ significantly, but that doesn’t mean they need to be kept in their separate corners. The most impactful advertising strategies incorporate a mix of both, with cohesive messaging and visuals from one medium to the next. Instead of approaching your advertising as digital vs. traditional, think of it as an interplay between the two.

Early forms of advertising were priced and measured by volume. What is that newspaper’s readership? How many listeners does that radio station have? What is the viewership for that TV station? The answers to these questions led businesses to purchase ads based mainly on how many people they could reach, rather than necessarily how many of the right people they could reach. They had to deduce when, where and how to get their message in front of their target audience – and then buy an ad in the physical space that best matched their assumptions.

As traditional media – newspapers, magazines, radio stations and TV – morphed into digital formats, the numbers game behind advertising changed significantly. Targeting with digital advertising today is more advanced than anyone in the Mad Men era could have ever imagined. Instead of creating a blanket message for a blanket audience, you can tailor your message and get it in front of the exact audience you believe your products or services are right for. Then, you can literally follow them around the Internet with retargeting, geo-targeting and other tools.

Think of it like this: you’re no longer buying ad space, but rather, an ad strategy that plugs you into the daily lives of the people you select based on age, interests and/or any other parameters you choose.

Digital and traditional advertising can easily coexist in your strategy without crossing paths. But, they are even more impactful when you use them to complement each other. Here are a few examples:

If you are running an aggressive ad campaign in a local newspaper publication, you should also mirror the distribution with a digital campaign. This will allow you to reach the readership both in print and online as they browse other websites. The ad saturation will reach the same market multiple times.

Train and bus ads are often overlooked, but they are an excellent method of saturating a geographic market. What do commuters access while on mass transit? Their digital devices. Through geo-targeting, we can reach riders with supporting messages.

Pairing digital advertising with a transit ad can be a great one-two punch for driving your point home. Netwave recently launched a combo transit and digital campaign targeting commuters to NYC from the Shore area. The transit ad promoted a specific product while the digital ad (which was displayed to visitors on their mobile devices) supported the artwork.

Using the same buying strategies for your cable television spots, you can run condensed versions of the spots on related web sites. This provides another dynamic duo, while maximizing your creative budget.

Banner ads are essentially the billboards of the Internet, allowing you to place your brand in both the physical and online worlds. The strategy behind both is the same: grab viewers’ attention with an eye-catching graphic and a few carefully chosen words. In the case of billboard advertising, they are seeing your message while traveling 60 mph or more. With digital ads, they are scanning web pages within seconds. The messaging needs to be clear and memorable in both mediums.

These are just a few examples to help you understand different ways we might be able to combine digital and traditional advertising to bring more eyeballs, more qualified leads and – of course – more customers to your business. There’s a lot more to it, and we’re here to manage all of the strategy, creative work and implementation for you. Learn more about our advertising philosophy and services here.

We are New Jersey's only creative marketing agency, serving clientele across the New Jersey, Florida & NYC metropolitan area.Have a look around & contact us to start getting more from your marketing.

We are a member of the Forbes Agency Council and share our creative and strategic insights there and on our blog. You can take a look at some of the trending topics we have published on Forbes.com or our blog.

Fresh From The Blog